If glass is involved in accidents or disasters, most injuries that occur are due to broken glass.  When glass breaks, the cracks move at speeds of up to 3,000 mph.  According to the International Window Film Association, there are five broad categories as to why glass breakage occurs.

1. Tensile stress from the weight of the glass 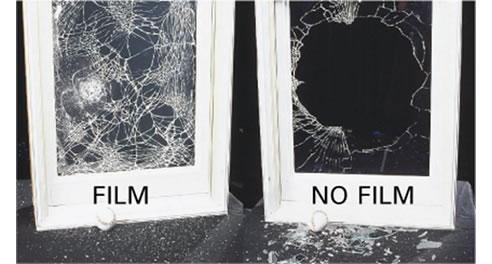 In case of a threat, window film will keep the glass in place and help prevent flying glass shards from harming those inside the building.  The film strengthens the glass of windows and increases safety from potential accidents, as well.  Glass is probably as attractive and clearly transparent as it is ever going to be, however the new frontier will be the resilience of glass.

All American Window Tinting, Inc., in Denver, has a wide selection of shatter resistant security films to meet your security and safety needs.  We have GSA approved level I, level II, and level 3A & 3B blast mitigation films (bomb blast film).  Shatter resistant or fragment retention film can be installed a couple different ways.  The first is installed on the daylight area of the glass  This means the security film will only hold the glass together and in the fame as long as some of the glass meets the frame.  Once the edge totally breaks the film, the broken glass will stay together with the film but will break away from the frame.  The shatter resistant film can also be anchored to the window frame itself using a silicone adhesive or Impact Protection Adhesive.  The film becomes flexible membrane holding the glass together and in the frame.

Schools across the country are supposed to be a safe environment free of crime and violence.  While this was the case in the past, student and teachers, from elementary to high school, are becoming the victims of malicious attacks.  There is no way to foresee an attack or natural disaster, but there are preventative measures that can be utilized in order to provide maximum security.  Shatter resistant security film and safety film is an optically clear, multilayer, polyester film that bonds to the inside of the window to reinforce the glass and help hold it in place upon impact. Shatter resistant fragment film is described in "mils" which is a measurement of thickness as one-thousandth of an inch.  Thickness can vary from 4 mil to 15mil and the varying thickness is achieved by mechanically laminating multiple layers of film together with aggressive adhesive coatings.
View on Mobile
School window tinting of Denver specializing in safety/security film, solar control film and anti-graffiti film. No project is too big or too small.